The island of Crete

The mountainous grounds of Crete allows for various levels of biking, ranging from easy to highly advanced especially if one is willing to go off-road. From East to West, a number of mountain ranges span the island, the highest peaks being Thripti (1489m), the Dikti Mountains (2148m), the Idi Mountains (2456m) and the White Mountains (2452m).

Within these mountain ranges, a plethora of valleys, gorges, plateau's, rivers, lakes and caves have formed over the years, populated with unique endemic flora and fauna.

On top of it all, the coastal surroundings of Crete provide the highest number of blue flagged beaches in Greece (being 3rd in the entire world).

The climate of Crete remains friendly for most outdoor activities throughout the year, allowing one to experience Crete during all four seasons, each one offering its own distinct character.

The Cretan climate is a mixture between Mediterranean and North African. The locations within the island (North and South, East and West) have a major impact on this due to the voluminous mountains ranges which separate the coasts. Thus, Crete can be characterized as having diverse microclimates, especially during autumn, winter and spring. Average temperatures during late spring, summer and early autumn range from mid 20s to plus 30° Celsius.

During late autumn, winter and early spring the peaks of the mountain ranges are covered with snow, supplying plenty of water and cooling the climate of the entire island. Average temperatures on the coasts range from 10 to mid 20° Celsius, while the average mountain zone temperatures fall approximately 10 degrees lower (5 – 15° Celsius).

Last, but certainly not least, is Crete’s traditional diet dating from the Minoan Era and surviving until nowadays. The inhabitants of Crete have the ability to locally cultivate and organically grow a variety of goods due to favorable environmental and soil conditions.

The Minoan dietary habits included the consumption of olive oil, fish, legumes, grapes and honey. Through time and through the influence of the various cultures that occupied the land, a pattern evolved harmonically incorporating various new foods.

A large number of scientific studies of the Cretan diet have been published over the years investigating the overall effect of the diet in relation to health. Up to date the traditional Cretan diet fulfils the requirements set by nutritionists as well as food professionals.

Offering you the best for your holidays

Contact The Hub - MTB and outdoor Adventures. If you are interested in customized MTB, hiking or birdwatching tours we will be happy to fullfill your requests. Our primary mission is to inspire to live life to the fullest through our unique tours. Moreover, we think seeing crete from our tours will bring an everlasting memory of such a beautiful place seldom seen. We look forward to meeting you. 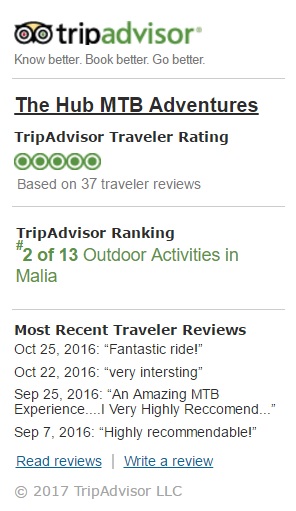